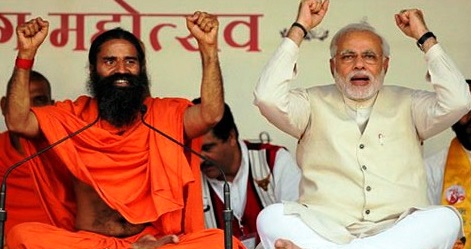 On March 20, 2015, Indian Government announced free yoga for its three million employees and their families as it seeks to promote health. A public circular said that the government was “organizing regular yoga training sessions from April 1, 2015, for the benefit of central government employees and their dependents”.

Celebrity yoga trainer Subodh Gupta termed it as a very good move and peaceful strategy by the Indian government. He said “most of the argument happens because of the tension and if tension is released by the daily yoga practice perhaps the work atmosphere would become more cordial and also work productivity is bound to improve in the central government departments. In addition, the police force and other paramilitary forces work under tremendous pressure and daily practice of yoga is much needed there”.

Some Indian politicians think that yoga can even help in reducing the growing problem of rape in India. For example, Shri Murli Manohar Joshi, a senior figure in the ruling Bharatiya Janata Party, said recently “I believe if yoga comes into the life of common people, then the daily incidents of rape, I would not say they will cease to exist, but there will definitely be a decrease in them”.

Prime Minister Narendra Modi is also a yoga fan who credits his strict regime of exercise and meditation for his ability to work long hours on just four or five hours’ sleep. This strategy may well be the biggest campaign of physical education by the Indian government for its 3 million civil servants and their families.